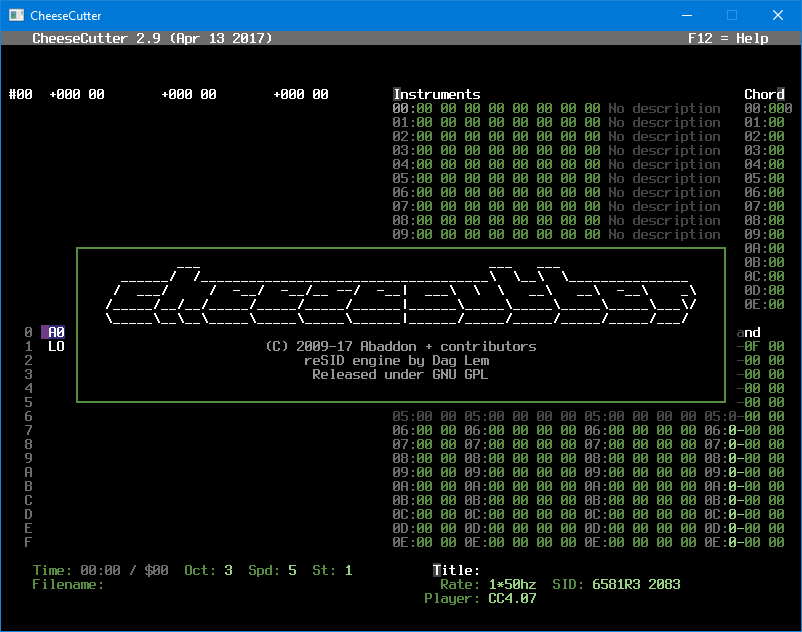 Changes:
- Added undo/redo (Ctrl-Z / Ctrl-R) functions for most editing functions in the sequencer.
- Fixed a serious bug in the player which caused song speed to go wrong (Y-register was not properly initialized).
- Position information for each subtune is retained. So as you change to another subtune, the editor jumps back to where you were last time in that subtune.
- Redesigned track list copy/paste functionality
Ctrl-c copies to memory
Ctrl-v pastes; dialog is opened for selecting paste mode (insert or overwrite)
Ctrl-o pastes overwriting the track data (exactly how Alt-B works)
Ctrl-i pastes by inserting to the cursor position
- For convenience, old ALT-Z & ALT-B still work.
- Added "sync" support into the player.
F0 command increases counter at a sort-of fixed memory location. removes the possibility to use two chord programs for song speeds.
- Fixed a bug when deleting rows in chord table.
- Fixed crash in file selector when last file in list had been moved/deleted and cursor was pointing to that file.
- Keyjam: gate is kept on for as long as the key is pressed. gate will be set off once key is released.
- Linux version now distributed as a snap package (64 bit only).
- CC_HOME shell variable sets default directory for load and save.